Archive for the ‘Number Games’ Category

Remove 6 liters of oil from a large oil container using only two mugs of 9 liter and 4 liter respectively.

A man forgot the secret code to open his locker. But he remembers the following clues:

Can you find out the secret code to help him out? 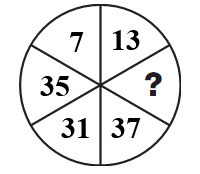 Put the numbers from 1-9 in the circles in such a manner that all the sides of the triangle add up to 17.

Fill in the boxes with numbers from 1-10. One number can be used only once.

Fill in the next line:

What are the missing numbers?